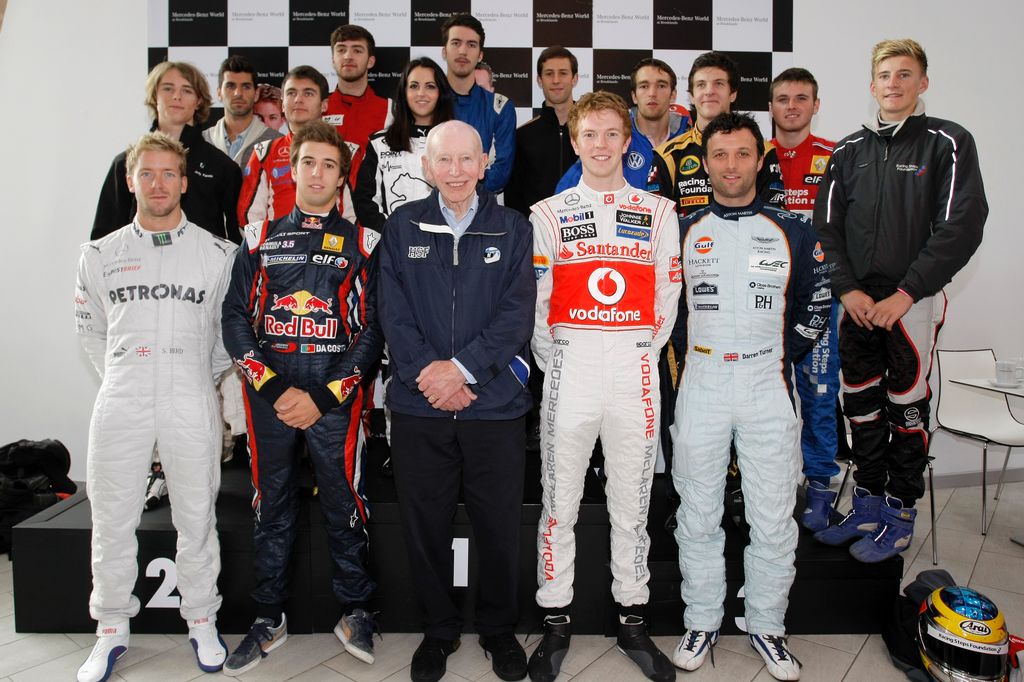 The inaugural ‘Henry Surtees Brooklands Team Challenge’ charity kart event at Mercedes-Benz World yesterday raised an estimated £54,000 for the charity, the Brooklands Museum and the Kent, Surrey & Sussex Air Ambulance Trust. The prestigious event was filmed by SKY F1 and will feature during its British Grand Prix programming this weekend.

Prior to the 2-hour race, which was started by Nigel Mansell CBE, was a track demonstration of the Surtees-Hart TS10 driven by Alexander Sims (Henry’s team mate at Manor Competition in Formula Renault UK), a Mercedes-Benz SLS AMG driven by Oliver Turvey and the 1933 Napier-Railton Special from the Brooklands Museum driven by Geoff Dovey.

The auction of items donated to the Foundation especially for the event was executed by Malcolm Barber of Bonhams. The auction alone raised £16,000 and was one of the highlights of the day.

The event was made possible by the support and generosity of the following: Mercedes-Benz World, Brooklands Museum, Daytona Motorsport (provision and running of all the karts), Millers Oils, Yorkshire (oil used in race), Mercedes AMG Petronas for the first prize of an F1 factory tour, Renault for their kind financial donation, MUMM (champagne supplier), Malcolm Barber of Bonhams, all of the Marshalls who volunteered, the Drivers and Team supporters who participated in the event and all reception guests.


Media Information
John Surtees comments:
“To stage a first time event of this type at Mercedes-Benz World obviously took a lot of effort from a lot of people. Without the enthusiastic entrants, the wonderful items that were donated for Bonhams to auction, the enthusiasm of the Brooklands Museum and all the helpers it couldn’t have happened. The smiles that were on the faces of the drivers as they got out of their Daytona karts and had sampled the circuit for the first time, came as a great relief and set the mood for the day.

The drivers, which varied from professional ones knocking on the door of Formula One to business people taking a day out of the office, enthusiastically competed on equal terms and had great fun. The racing was followed by a reception where the Mumm champagne was eagerly consumed, rather than sprayed, and the prize giving and auction went forward with great enthusiasm and generosity. It is estimated that £54,000 was raised, against which only direct expenses relative to contractors will be deducted.”

For further media information and images from the event please contact:
Emma Buxton, [email protected] tel: 07525 150 625
Notes:
 Henry Surtees Foundation - www.henrysurteesfoundation.com
Mission Statement - To assist people with accidental brain and physical injuries, provide education and training in technology, engineering and fitness. Advance young people by developing their skills and capabilities so that they can participate in society as independent and responsible individuals.
 Kent, Surrey & Sussex Air Ambulance Trust - Blood Transfusion:
A number of clinical trials have demonstrated that blood is the most effective resuscitation fluid for minimising mortality from traumatic injury and the earlier it is given the better the chances of patient survival.
The Trust therefore wishes to be able to transfuse those patients who need blood in the pre-hospital environment thereby saving time and lives.
As the Trust does not work from a hospital base, we need to establish protocols with the National Blood Transfusion Service which allow for a system to be established which will allow blood products to be moved from the hospital to the pre-hospital environment in a fashion that maximises the availability of this life-saving intervention and, at the same time, ensures unused blood is returned into the national system to prevent wastage of this precious resource.

In celebration of National Motorsport Week, Ginetta have listed on eBay a place on their Ginetta Junior test session at Bedford Autodrome on 31 July 2012 as well as an entry into their 2013 Ginetta Junior Scholarship scheme. Read more >>

Motorsport enthusiasts are being given the chance to take a special, behind-the-scenes tour of the world famous Williams Formula One team factory in Wantage, Oxfordshire. The exclusive opportunity comes as part of the team’s support of National Motorsport Week (NMW) and will take place on Sunday 21 October. Read more >>