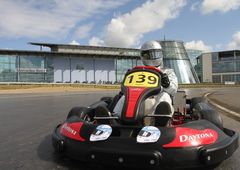 Mercedes-Benz World and the Brooklands Museum together provide an iconic venue for the inaugural ‘Henry Surtees Brooklands Team Challenge’. Following the 2-hour endurance kart race, which is hoped to be both competitive and fun, there will be a Champagne and Canapé reception hosted by Steve Rider and Henry Hope-Frost. The Challenge prize giving ceremony will take place during the reception, in addition to staged interviews with some of the attending drivers and personalities, an auction of some very special items donated to the Foundation especially for this event will be carried out by Malcolm Barber of Bonhams.

Team entry for the Challenge is £1,000.00. Non-racing supporters are invited to come along and watch the racing, enjoy the Museum and Mercedes-Benz World. Tickets for the Champagne and Canapé Reception are available for a minimum donation of £40.00.

Adrian Bell, Chief Executive of the Kent, Surrey & Sussex Air Ambulance Trust says, “We are delighted to have the opportunity to work with the Henry Surtees Foundation and particularly value its support for our life-saving service. As an emergency medical service we see a significant number of head injuries and applaud the foundation for the work that it does with young people and in helping victims of such injuries.

The support of the Henry Surtees Foundation in helping us to achieve a key strategic aim – blood transfusion in the pre-hospital environment – is really appreciated and gives us hope that we can make this a reality sooner rather later. We are looking forward to the ‘Henry Surtees Brooklands Team Challenge’ and hope that the public will support the event and help to raise valuable funds.”

Santa Pod Raceway may be Europe’s premier Dragstrip, attracting some of the world’s greatest drivers, but for National Motorsport Week (30TH June to 8th July), the Northamptonshire venue hopes to attract some fresh talent from closer to home – by offering all local residents free track time! Read more >>

The organisers of National Motorsport Week are pleased to announce that David Coulthard MBE and Nick Fry are joining the 2012 campaign as ‘official spokesmen’. With 13 Grand Prix victories, Coulthard is one of the UK’s most successful F1 drivers while Fry has experienced Formula 1 glory as CEO of the Honda, Brawn and, most recently, Mercedes F1 teams. Read more >>